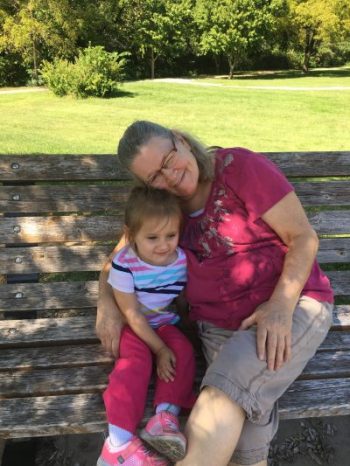 Not everyone is as ready and motivated to start a yoga practice as Marta.  She has a serious, life-threatening disease called pancreatitis.  Among the various treatments, her doctors told her yoga would help.   Since she goes to my church and I offer a weekly yoga class at the church, I was the first yoga teacher she thought of.  She called about a month ago, “Carol, can I come to yoga on Wednesdays?  I have never done any yoga at all.”  “Of course you can.  All are welcome.”

During her first class her hip hurt.  I had her lay down on her back and sway her knees like windshield wipers, cross an ankle over the opposite bent knee to open her hips and other warm ups.  She was willing, but I could tell from her grimaced face that it was not very comfortable.  She attempted some sun salutes as I worked with the whole class but mostly needed to observe and rest.  During shavasana, her legs were shaking uncontrollably.  I made some adjustments to help her get as comfortable as possible.

She diligently practiced what she could each day at home and returned to class and learned more.  The next week she traveled to Minnesota to discuss the possibility of a risky and complex surgery.  She reported on doing yoga and described what she was working on and was told it was the “right kind of yoga”.   When she got home she called me to tell me what the doctors had said then asked me, “How fast can we do this yoga?” She couldn’t see my smile on the phone as I replied, “Only as fast as your body can open up.” I suggested, “We could meet an extra time each week privately, but it would cost.”  Enthusiastically she chose to do some private lessons.

We went over a lot of background during her first private lesson.  She showed me four exercises the doctors want her to do and I showed her how they were, or at least could be, part of her yoga practice.  We repeated several of the warm ups she had been practicing and added some poses that she could hold for only 2 breaths before feeling overwhelmed.  Downward facing dog was especially challenging.  I gave her the Holding Space Practice book and and workbook to add to her practice.

During the week, she texted me updates.  After a few days, she was able to hold the poses for more breaths.  For the first time in months she had slept through the night (seven hours) for three nights in a row.  Then late Saturday night she called to report another kind of progress.  She was having a painful pancreatic attack.  The pain from these attacks had taken her to the hospital every-other-week for many months.  This time she was using pranayama (breathing) to tolerate the pain and noticed the way she usually tenses her muscles to resist the pain.  This time she was accepting the pain and relaxing muscles when she noticed them clench.  She made it through this attack in this way using ibuprofen to help but did not have to go to the hospital for stronger pain meds.  Her mindset was shifting.

Yesterday, two days after the attack began, she came to her private yoga lesson.  She was energetic and ready to get started right away so we began from standing.  I stepped her through standing salute sequences several times then some modified charanga, updog and downdog poses one at a time.   Next thing we knew she was doing a surya namaskar A.   She had enough energy to repeat five of them even after all the warm ups she did.   Before closing, I took her through 3 seated poses: dandasana, pachimottanasana and baddha konasana. She reminded me of the hip pain she had had the first class and reported that it was gone.  As she went into shavasana, I helped her find a comfortable placement for her legs using a partially inflated exercise ball.  There was some shaking in one of the legs, but much less than before.

There was a little noise in the other room and I taught her that shavasana is a good time to practice the yoga limb of pratyahara (drawing the senses inward.) Once settled, I told her I was going to do what my teacher, Tung, did for me when I first started yoga.  He would leave the room and let students stay in shavasana as long as they wanted to.  I was always the last to leave and had profound personal experiences in those early yoga days.   I reminded her to wake slowly and pause on her side to rest, then make her way to a comfortable seat for a few minutes with her eyes closed.  That final sitting is a time for gratitude before entering back into the day.  I then stepped out of the room and sat nearby in the next room.

When she emerged, she came to me and said, “Do you always feel “out of it” at the end of yoga?”  She was so relaxed she felt groggy.  Dreamy might be a better adjective.  I laughed, “Yes, if it has been a good practice.”  I then reminded her that yoga was more about the mind than the body.  It is for the “cessation of the fluctuations of the mind” which was exactly what I was observing in her at that moment.

She then said something that surprised me.  “Can we have two more private lessons?  My good friends that have known me for a long time said they want to pay for more lessons because they have seen such a huge change and improvement.”  She was not only talking about the leaps in physical strength we could observe, but even more obvious was the quieting of her mind.  She says that her mind is not constantly racing now like it used to. The change in the quality of her energy is obvious.  After she left, my 21-year-old daughter, who has known Marta for many years, also commented on how different Marta’s energy is.

I know yoga is powerful, but this has been the most obvious and quick transition I have seen.