I was not opposed to traveling to Honduras, I just had never thought of it until my yoga teacher said, about a year ago, “I never wanted to host a yoga retreat before until I visited Copan Honduras and then I immediately wanted to host a retreat and bring people back here.”

Really, I had never thought of traveling to Honduras until the day she said that.  Spending a week with Kim immersed in yoga sounded great to me no matter where it was, so I said, “I am in”.  I didn’t know how that was going to happen but knew if it was “meant to be” it would work out.

I went home and mentioned it to Eric and his immediate response was “Let’s go!”  I don’t know why the response from my wander-lust husband surprised me.  I had anticipated a list of reasons why it didn’t make sense that I would need to work through. That list was already forming in my mind.  His response shrunk that list down to a manageable size.

We had been discussing taking a “big trip” for our 25th wedding anniversary for a few years.  This was it.  Still, the list of obstacles in my mind was real and I had to overcome them one by one.

Ten days before the scheduled departure of our group, there was a call for a national strike in Honduras that threatened to interrupt air and ground transportation the week we were to arrive.  Through a series of miracles that I won’t try to catalog here, all fourteen participants managed to re-route flights into Guatemala City and enter Honduras on the western border despite the option for a full refund if preferred.

The bus ride from the airport to the border was MUCH longer and more tedious than I anticipated.  The headache and little waves of nausea made me wonder, “Did we make the right choice?”  Hours later, the bus slowed to a stop.  I saw a metal arm reach across the road in front of us.  The driver explained in Spanish, “This is the border.  Everyone needs their passport.  Quickly, the border offices close at 9:00 pm and it is after 8:30.”

I was the first one that stepped off the bus and as I did, I saw Kim and others there to welcome us.  I stepped to her to give her a hug and her first words were, “We are doing this again next year. I’ve already scheduled to come back.”  “Wow!”  I thought, “Really?”    Then someone said, “We are only 30 minutes from La Hacienda.”

We showed our passports at one window and then walked across the street to a building. I walked with Paola whose English was so perfect I questioned if she was local. She had never lived outside of Honduras.  I was more than impressed.

Two people were standing in line when our group trickled into the government building with bank-teller-like windows on two sides of the room. Two windows with workers were available to handle the last of the border crossers for the day.  There was a 5×6 inch screen to take photos of our finger prints. “Poosh” the worker instructed with a gesture to push our fingers harder on the screen when the machine seemed to be taking too long to register.

Once back on the bus, we had one last mountain road to climb and soon entered the dark and quiet town of Copan Ruinas.  The bus stopped at the bus station.  Little did I know how close we were when we entered the 15-passenger van that took us up one more little stretch of bumpy, steep dirt road to “Hacienda San Lucas”.

We unloaded our tired bodies and walked a few steps standing in front of the old outdoor kitchen with a domed adobe oven and a wooden carved “Hacienda San Lucas” sign with a moon, star and toad carved into it.  This would be the “concierge” desk for our stay.  Underfoot were natural, flat and very evenly hand-laid rocks.  Having laid out rocks like this in my landscape I appreciated the hours of love-labor that went into the art we stepped on. More than the amazing architecture I was taking in, I marveled at a small staff palpably excited to greet us at 10 pm.  Men were carrying our heavy-packed suitcases to rooms we were being assigned as we stood in a circle and then one-by-one guided to our rooms.

Because it was our 25th wedding anniversary trip, we were assigned the “honeymoon suite”.  It looked like all the other rooms, but  acknowledging the detail that it was our anniversary was indicative of the kind of personal care that would be given to everyone the whole time we were there. 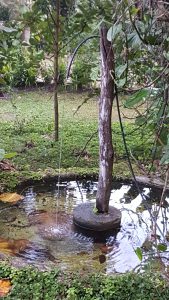 We climbed the stone stairs passing a sweet splashing water feature similar to one I have made with found-things in our yard.

There was a porch with hammocks, chairs and tables with fresh flower arrangements outside the three rooms of our area.

What struck me most were the lit candles on the porch and inside the room and more small flower arrangements in pottery vases.  Every night a staff member would light those candles at dusk before we reached our room to sleep. Dinner was awaiting us down in the outdoor, candlelit dining porch.  I could taste the loving care that went into that (and all) meals there.  It was graciously and individually served.  It was nice not to choose the menu, but I loved all the food that was chosen for us.  There is serious magic in the food at La Hacienda!  Beyond the pristine cuisine, it was the spirit of “a la orden” that made me feel so good.

Before retiring to our rooms, Kim showed us “Gaia”, our yoga shala for the week.  It was several paces across the gravel parking lot where we had arrived, then down a grass pathway flanked with tropical plants.  There was another wooden carved sign indicating this is a place of meditation and silence. 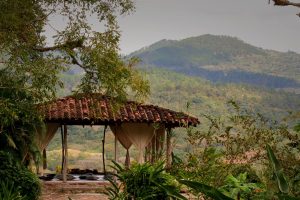 At the end of the path is a wooden-floored pavilion with large curtains tied in hanging columns.  There was no need for a “remove shoes” sign as every instinct tells you to take off your shoes before stepping into the sacred space.

Walking across the floor to the opposite side was a small, new fire pit (that we would initiate later in the week) built in front of the shala just before the hillside drops down into the Copan River valley. The eye follows the view to the mountainside on the other side of the river and then up to the left where the twinkling lights of our little town sparkled like stars.

I had just arrived, but I could not wait to return to this place.  No wonder Kim’s first words were, “We are coming back”.   Had I really only been there a little more than an hour?  It must have been close to midnight when we went to bed, but at 4 am I was awake and within 15 minutes I was heading toward the shala with my yoga mat.

I just sat and stared for a while at the same magical scene I had left the night before.  I watched the headlights of a solo car move along a road on the opposite mountain.  I wondered at the white rows I saw in farm fields near the river.  Later, I learned these were tunnels where crops were planted so the insects could not get to them and pesticides could be avoided. 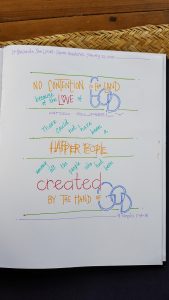 I laid down for a while, resting on my mat until the faint light of dawn appeared.  I gathered the shala’s throw pillows in my lap to draw when it was light enough.  A scripture scene from the Book of Mormon came to me and I designed a page in my doodle journal with it.

The experience was not about what my eyes saw, it was what my heart felt.  These were good, peaceful, joyful people.  The day was just dawning on my first day in Copan, but I KNEW, these were good people.  I could FEEL it!  I had never felt such deep peace and joy.  Tears trickled down my face in that sacred spot where God was so nearby.

The coming week would only verify and reinforce what I knew in the dark and dawn of my first hours at Hacienda San Lucas.  “It is such a special place” Kim had said.  “People come here for a reason.”  and, “If it is meant to be, it will happen.”

In the days since I returned home and told people about this special place, many have said, “I want to go!”  How can I not share this with them? I had never wanted or thought of leading a yoga retreat either, but within an hour of being at La Hacienda I realized, like Kim, that I need to give this opportunity to others?